Jennie and I had already been in Jerusalem for a couple of days when we met up with everybody else on the 24th October. Nobody had any problems at the airport. Most of us then went through to Ramallah with some of the Faringdon people scheduled to join us later.

Mohamed our village organiser had to go to a PLO meeting called by Abbas to set the date for Palestinian elections. After this he accompanied us to the village of Arura where we ate with Hassan (Mohamed's brother), his wife and daughters. Accommodation was in two households even though there ended up being 19 of us: 12 from Oxford and 7 from Faringdon.

For the next four days we went to the olive groves picking for two separate families in various locations on anceint terraces. The weather was hot but pleasant. We had varying tree-climbing abilities but there was work for everybody. The coffee breaks and picnics under the trees were wonderful. At the end of the day the olives were put in bags and carried back to the road by donkey. 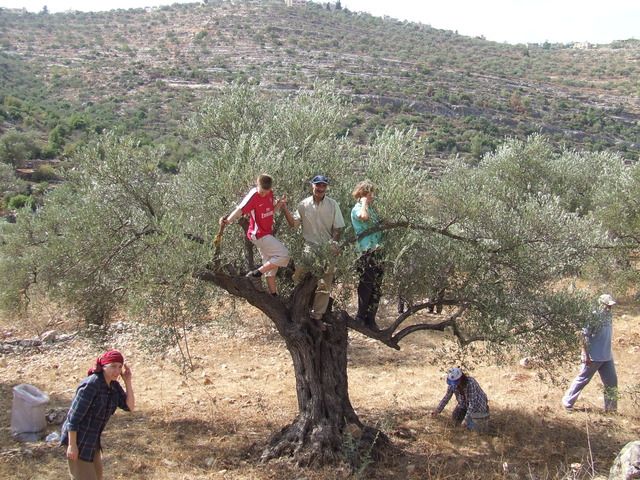 In the evenings we met village committees, started the process of Faringdon/Arura twinning, and visited the olive press, the police station, a local cafe, did a tour round the old village, went up to the top of the overlooking hill, and the two 13 year olds talked in a school. After a busy and fruitful week we came away with zaatar olive soap, almonds and memories.

Thursday 29th we returned to a hotel in Ramallah.

The next morning we went off to Jerusalem. We walked through the Old City looking at the sights and then joined the Women in Black group of very brave Jewish peaceniks who demonstrate against occupation every Friday in West Jerusalem. We were meant to then do a tour but our driver was sick so we went back to Ramallah. 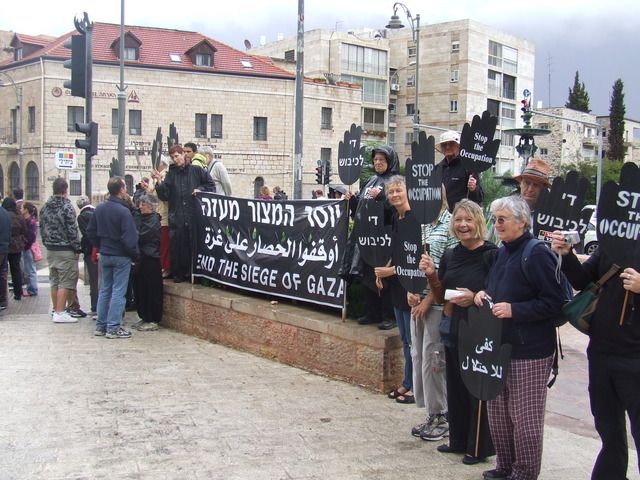 On Saturday some of our group had returned to the UK but the rest went around the Al Amari Refugee Camp and had a meeting in the Women's Centre. This included some of the plans for our next visit to the UK by young people from the Camp. We also met a group from France who do regular work in the Camp.

Sunday Morning early saw us heading off to Jericho with our old friend Mahmoud Hawari who runs the Archaeological Department at Bir Zeit University. This was a real treat visiting the remains of the Old City, the oldest walled city anywhere, also Herod's Winter Palace and Hisham's Palace which Mahmoud is now working on. You could see from these digs how the Israelis try to control Archaeology and to try to limit history to Jewish history. In the middle of the day we went up in a cable car to an anceint monastery and we ate in the hillside restaurant.

We then returned to Ramallah. On the route to Jericho we went on many small roads and returned by a major road that the Israelis want to make Jewish only.

The next day Mahmoud and a young Palestinian from 'Right to Education' showed us Birzeit University. They told us that in that year alone two heads of the Student Council had been imprisoned and had to be replaced. We were also given a tour of the museum and gallery within the University by its organiser - also an old friend of ORFA - artist Vera Tamari. Such a privilege. 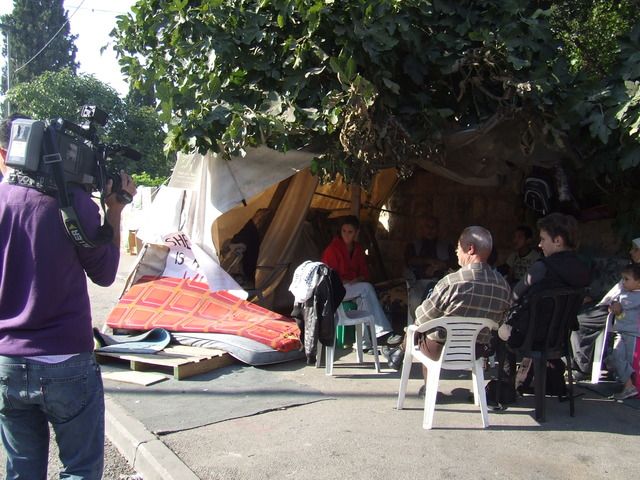 On Tuesday some of our group went by regular bus to Nablus. This used to be nearly impossible, but it is one of the few ways life is a little easier, like being able to move between prisons. They visited the Old Market and other historical sights as well as meeting the Samaritans.

It should be mentioned that by this time there was torrential rain throughout the West Bank. Lucky we picked olives the previous week.

On Wednesday our final active day in the West Bank we went to Bethlehem for a day organised by old friends Basim and Hanan (who visited Oxford last year).

There was a visit to Badeel where we had a talk about refugees and their rights, then Aida Camp and the Lajee Centre there. The projects that they carry out here to get young refugees involved in photography, filming and other artistic endeavours are marvellous. After visiting the Hospital where Hanan works we did a tour of the Holy Nativity Church and returned to Jerusalem.

On our last morning we had an ICAHD (Israeli Committee against House Demolitions) tour of Jerusalem. This was a good way to wind up seeing how badly serviced Palestinian areas of the city were, also the way the Wall is stealing land for the development of strategic settlements in East Jerusalem. The tour took us into a major settlement in the West Bank with its green lushness using stolen water, its stolen olive trees, and plans for expansion. The trip also showed how easy it was for an Israeli bus to go in and out of the West Bank.

Afterwards I went down to Sheikh Jarrah in East Jerusalem and saw the houses that the settlers were stealing off people with the long-term Palestinian residents in tents on the pavements.