Back in to Ramallah from Jerusalem. Today we go to the demonstration in Al Manara Sq, about Alan Johnson. All the local media is there, as well as a lot of international reporters. They have agreed a three day strike, and will only report about the Alan Johnson story. Speeches are made, condemning the kidnapping, and most people hold the position that it is a blow to the Palestinian cause, if journalists are attacked. Up to now it has been the Israelis who have injured journalists, and we hear of one, who has just come out of hospital after 3 months, who was shot by the Israelis in Ramallah. We learn, at this point that we have just missed a demonstration, at the ministry, of striking health workers. They are demanding unpaid wages. I then go to the local branch of the Palestinian General Federation of Trade Unions, they of course describe the horrible problems of workers, with the high levels of unemployment, and still problems of getting to work through road blocks. Also the problem of the wall stopping particularly agricultural workers. 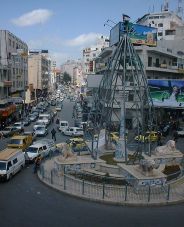 The Oxford Ramallah Friendship delegation then go down to Al Amari Refugee Camp, in Ramallah, to help pick the eight children, who we are bringing over in July. The choosing is hard, because there are a lot who fit in to our criteria, of poverty, hard family circumstances, through martyrdom, or imprisonment, and doing well at school. With the help of the women's centre, and our friends it is done. We then head back in to Ramallah. Here we attend a meeting of our supporters in Ramallah. It turns in to something different, in that leading members of several of the new unions have been invited. I will produce a full report of this later, but it is a historic development. Many of these bodies were in embryo on my first visit 4 years ago, and they are now going to form their national federation in July. They are working in the most difficult conditions, and are carrying out various actions, one described hunger strikes, speeding up production when there is shortage of materials. The hospitals have had long strikes, and forced negotiations with ministers. The newest formation is of unemployed workers, they pay 15 shekels (£2) to join, and they organise conferences, demonstrations, as well as help with healthcare etc. This is the first unemployed union in the middle East, although one is now being started in Egypt. These are the poorest workers, and the Palestinian authority tried to block their formation arguing it was against the existing Jordanian laws. They were told that unlike other unions they did not represent a sector. But after a large conference, attended by a minister they forced recognition, and could now open a bank account. They already have 10s of thousands of members, and are looking for support from trade unionists in Europe. We finalised our meeting with preparation for Thursday's twinning conference in Ramallah, and finally went to eat. 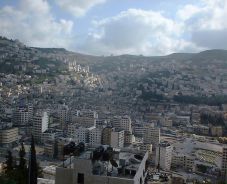 This is a different kettle of fish. We get a bus from Ramallah, not too much of a problem, getting to Hawara checkpoint, at the entrance to Nablus. This is also quite easy to cross, but the first sign of how desperate things are is the fact that taxi drivers seem to want to fight over our custom. So we decide to walk. We pass Balata refugee camp, where that morning a leading militant had been seriously wounded in an Israeli raid. When we get in to town we walk in to the old city, there are no Europeans whatsoever, we go down a backstreet, where we are confronted by a gunman, a bit scary, but he lets us pass. We decide to stay in the main streets, and after a coffee, and then a meal we arrange to meet a political activist. We go to the wrong building, and whilst on the street are greeted by four young fighters, who shake our hands, but are obviously checking us out. A guide on the street explains that they are wanted by the Israelis, and that this is a city under siege. When we go to meet our contact we notice that as well as the fighters there are many different sections of the armed Palestinian forces. At the Fide offices our contact explains that conditions are particularly bad for any kind of business, there is 70 per cent unemployment, because people with money have got out, to other cities, or countries, this explains the huge amount of building in Ramallah. This also shows that the Israelis don't just want three Bantustans, but they want some worse off than others. 4000 of the 11000 Palestinian prisoners in Israeli jails are from Nablus. There are daily raids, and not even the Arab press reports all the incidents. Most of the media is in Ramallah, this is why the Israelis don't want anybody going in to Nablus, so they can do what they want. We decide to head back to Ramallah. The checkpoint is easy for us because women and foreigners go out of a separate exit. I don't like doing this, but we need to stay together. 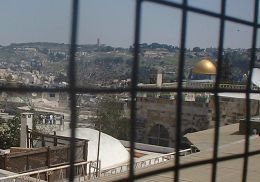 Easier day today. Wonderful lunch with Janet Michael, the Mayor of Ramallah the first Woman Mayor of a major city on the West Bank (are there many in the Middle East?). She describes their problems, and like all the people we meet stresses the need to lift the European sanctions. It is interesting that the Hamas councillors voted for her to be Mayor, against the Fateh candidate, she stood as an independent. We then head off to the Al Amari camp again, to see the parents of the children, to confirm that they are happy with our plans. They explain that after the last group of kids came everybody wants to come, and they trust us, in fact they say why not bring the mothers. It looks clear that we have managed to steer clear of any particularly group, in relation to the picking, and therefore have developed this trust. Back to Ramallah, for a Mozart Concert in the Boys School, and performances by the London Choir with the Jerusalem Choir. A far cry from the streets of Nablus.

We often use the term twinning, but the conference is clearly about linking, people to people. There are over 30 delegates from the UK, plus a touring football team. There are about 70 from Palestine. This is the fourth such conference, and it has clearly taken off. The only person stopped by the Israelis at Tel Aviv, was held for three days, she was a Moslem woman. Janet Michael opened the Conference, and there were speeches from a political unity organisation, and from an NGO. The first workshop was on the Wall, which though good meant that the conference took a while to get going. But once the practical workshops started it was clear that there was a great enthusiasm for this kind of work. In the report back discussion there was some debate as to whether one includes all political parties, or concentrates on the left. A final statement was made, and contacts exchanged. There will be a full report on www.twinningwithpalestine.net.

Got taxi from Ramallah hotel to city centre. Main road was blocked off by the preparations for a huge Hamas demonstration, and rally. Walked to bus station. We then got bus to Jerusalem. At the Qualandia checkpoint all the Palestinians have to get off, and go through luggage check, as we have a lot of luggage we decide to stay on board this time. The guards come on the bus to check international passports. Five elderly religious black South Africans, two of them nuns, don't have stamps on their passports, because they came from Saudi Arabia and there is a policy of not stamping these. So after going through several different levels of 18 year old guards, who cannot understand why nuns would wish to go to Jerusalem on Good Friday, they are made to get off and join the Palestinian checking procedure. So when we got through the Palestinians were waiting for the bus, and we never did connect with the S.Africans again. They must have felt they were in a time warp. The result of this was an hours delay. As we got close to the Old City in Jerusalem we were stopped again, and rechecked. Another delay as the soldiers phoned through about some of the identity cards. This is meant to be a half hour journey, but without any real incident it took over three times that.

Meet unemployed workers in the morning, they need computers, and any other help. Any ideas would be welcome. It is possible to bring over second hand laptops. The unemployed get no social security, just sometimes maybe a thousand from each region get 100 dollars a month for 3 months, and then a different thousand. The state used to give a couple of thousand social work for a month, again for three months, but this policy has stopped, and they are trying to get it reinstated. we then went to the Easter religious march through town. This is led by huge Scout Marching Bands, including muslim troops. At the front of one of the bands are pictures of martyrs, who were in the band. All are highly nationay, led by Palestinian flags. (These were the only kind of processions the british used to allow). Then came all the religious dignitaries, on their way to receive the flame from Jerusalem. Now head off to camp for final meeting with the kids, and photo shoot.