Mohammed Saleh (Aruri), Head of International Relations for the Federation of Independent Unions Palestine, and representative of Arura village in its twinning with Faringdon, visited us. His trip was scheduled to start on the 18th of November, but Mohammed was initially refused a visa by the British Consulate in Amman. After many emails etc. including to the Embassy, the decision was reversed. So Mohammed arrived on the 21st. That afternoon he had a tour of Faringdon followed by a shared meal in the evening and discussion with Arura Faringdon Friendship Association (AFFA).

On Tuesday 22nd he visited an organic farm which has set up a community-owned wind farm and more recently a solar farm. Mohammed discussed with the farmers the potential value of solar farms in rural Palestine. In the evening he came to Oxford, to speak at a meeting of the organisers of the strike on Nov 30th. He brought greetings to the strike from his federation, and was invited to speak at the rally on the day. Many speakers noted the connection between the British strikes, and the Arab Spring, and other resistance.

The next day Mohammed visited Faringdon Community College. He had a tour of the school, visiting a number of classrooms and spoke to a class of 16 year olds. The College has specialist status in engineering and Mohammed was impressed by the practical design and technology courses on offer which they do not have in Palestinian schools. The Head presented him with a prospectus and paperweight. After that he went, by train to Parliament, to participate in the Annual PSC lobby of Parliament. We met the member of Parliament for Oxford, Andrew Smith. Mohammed raised the visa problems, and his impossibility of visiting Jerusalem. Andrew later sent us a letter saying he had raised these questions with the Foreign Secretary, and was awaiting a reply. We then met PSC officers, and agreed to hold a meeting with them the following week. In the evening Mohammed addressed a well attended AFFA public meeting in Faringdon Town Hall on the theme of 'Life in the West Bank'. 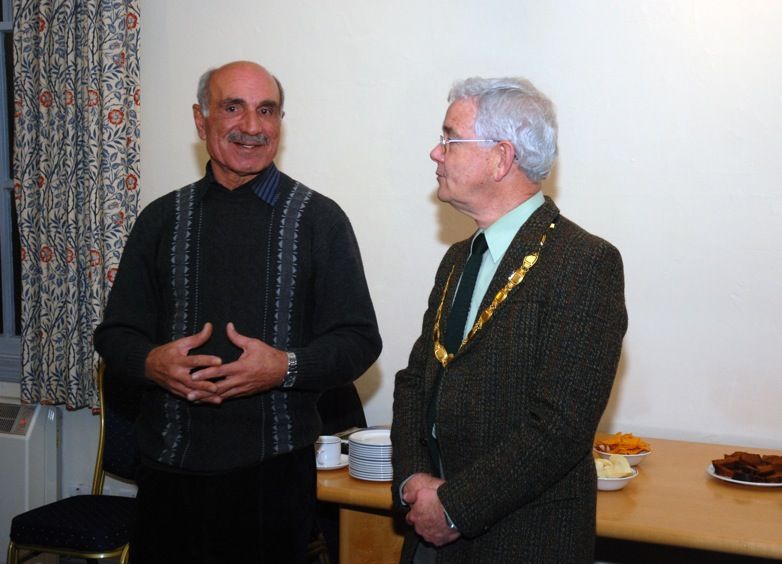 On Thursday morning the 24th Mohammed addressed a seminar in Brookes University, and received a good response. In the evening he addressed a Socialist Resistance, and Green Left meeting, at which the speaker was Filipino ecosocialist Maria Pampilo. This meeting was about food sovereignty, something entirely relevant to Palestine.

The following evening we had a meal, in a Lebanese restaurant, with supporters of Oxford Ramallah Friendship Association.

Saturday was taken up with the National Twinning With Palestine Conference in Liverpool. About 60 delegates attended, from all over the UK, including from Oxford and Faringdon. The conference was opened by Liverpool-Beilin group, and had the annual report, followed by workshops on education and other forms of twinning. Mohammed spoke in a workshop on linking unions. There were 5 Palestinians from the West Bank, brought over by their groups. Many good suggestions, about the groups most successful activities, were made.  It was nice that it was held in the CASA club, which was formed out of the Liverpool Dockers Strike. At the end a committee was elected from all over England, Scotland and Wales.

On Monday the 28th from 12-3pm, we attended a teach in, held by Save Our Services. This was held in Bonn Square in Oxford, and consisted of people talking to the Public about the Nov 30th strike. Mohammed also spoke. In the evening we went back to Faringdon, to a reception held by the Mayor. Eleven out of fourteen Town Councillors attended, along with a County Councillor. The Chairman of the Vale of the White Horse District Council was very sorry she could not attend but wants to be kept up to date with AFFA activities. The Mayor welcomed Mohammed, who then replied, and gifts were exchanged. Both parties are keen to develop civic links. 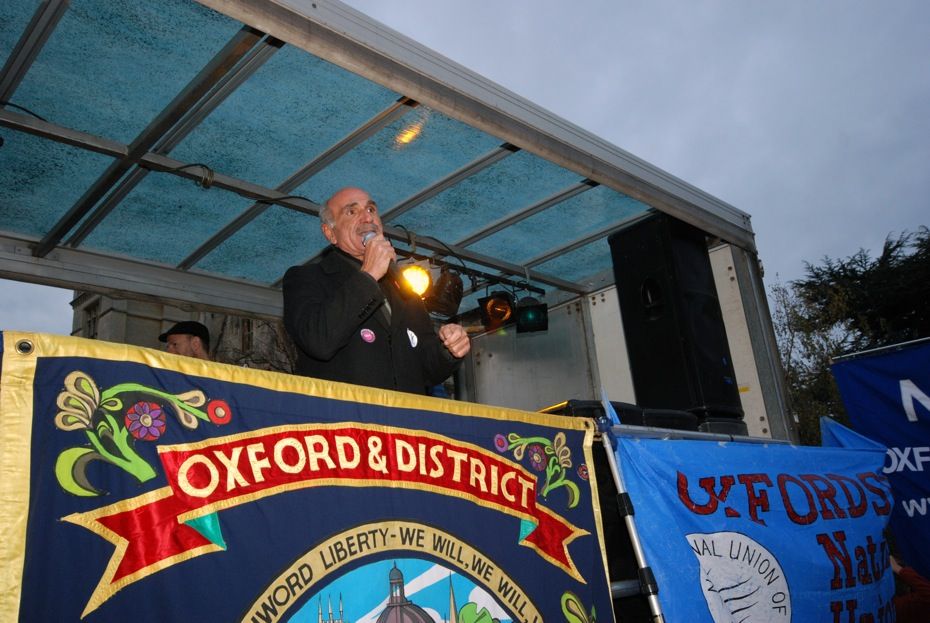 The main public meeting in Oxford was on the 29th, in the evening. It was held at Ruskin College, which has a long history of educating trade unionists. Again this was a good discussion, and gave people the chance to ask questions, like the relations between Fateh and Hamas, the politics of his federation, and one state solution, or two states. Mohammed was also presented with books from the Unite union branch at the massive BMW plant in Oxford.

The 30th was a really busy day, we toured the picket lines in the city centre; police support workers, probation officers, Town Hall workers, County Hall workers, College of Further Education teachers. Then out to Brookes University, and the Churchill, and then Warneford Hospitals. Everywhere a good response, and at the Colleges Mohammed was able to talk about the impending lecturers strike in Palestine. The march on that day was organised first in to sectors, and we joined the Public Sector section. All three groups joined together for the last part in to the centre of Oxford. Everybody said it was the biggest march ever in Oxford. The TV estimated 6,000 at the rally. As well as all sections of strikers, Mohammed spoke, bringing Solidarity from his federation. Not often that Palestine gets a mention at a strike rally in the UK. 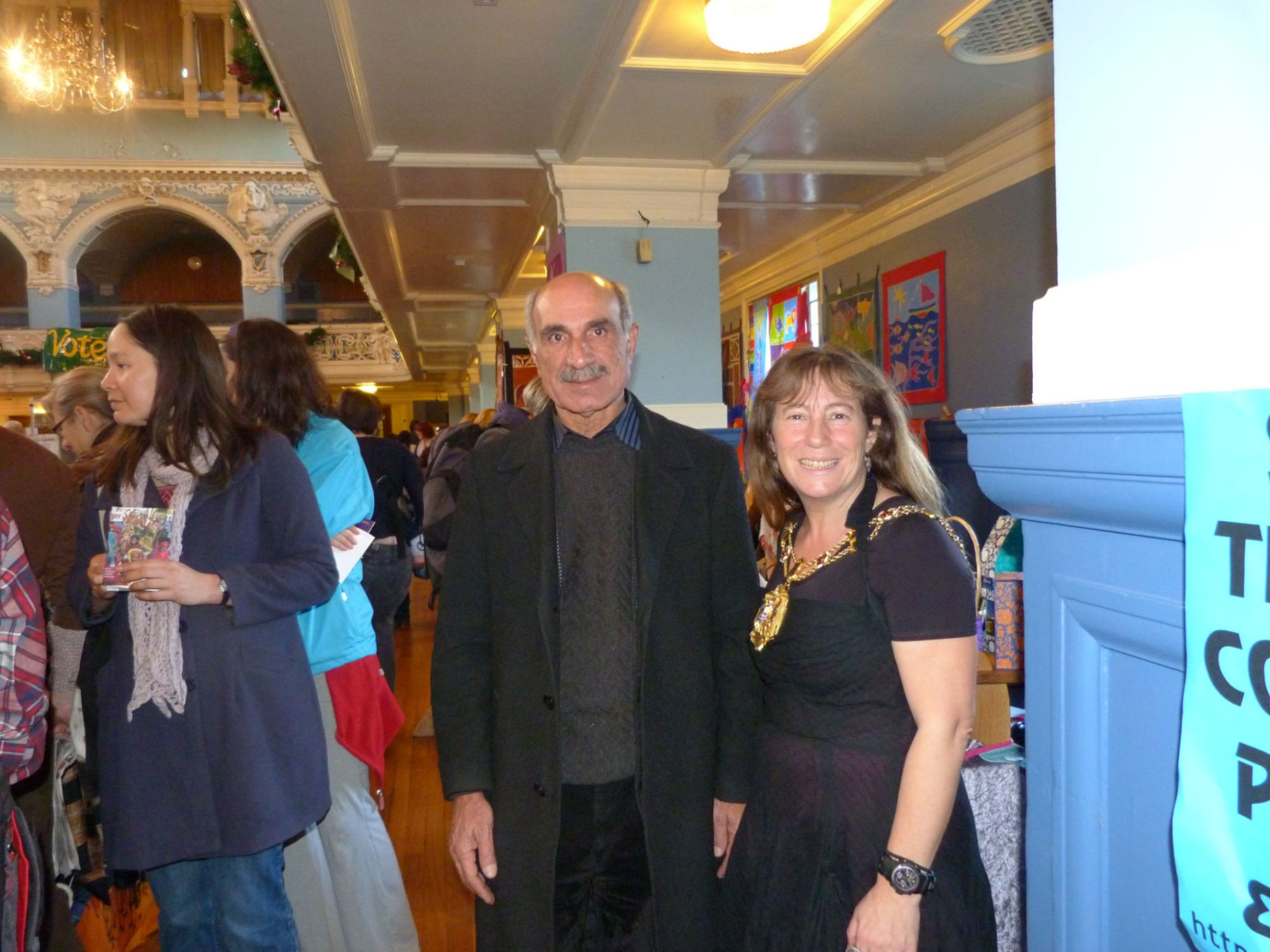 On the 1st Dec. Mohammed addressed the Oxford TUC. This enthusiastic meeting agreed to send solidarity greetings, and that at their AGM they would discuss sending a delegation to Palestine. In the meantime they asked a series of questions as to what way they could help.

We had our fruitful discussions with PSC officers on the Friday, and an article in PSC news will follow this. We also met Mohammed's old friends Bernard and Carole Regan. After this we went to the Tent City Occupation, at St Pauls. Many photos were taken.

At the Green Fair, on Saturday 3rd, we met the Mayor of Oxford, who was extremely friendly. Considering that she is the first Jewish Mayor ever this is quite symbolic.

The rest of the visit was taken up with Mohammed cooking for the Oxford supporters, and a meal with ORFA and AFFA in Faringdon. Much discussion was held with regards to the next steps. Youth delegations, Trade Union delegations, and an olive picking trip in 2012 were all mentioned.

In his few gaps Mohammed had an opportunity to visit Oxford Colleges, the Ashmolean, and other Museums of Oxford. He successfully flew back to Amman on the 6th.