An ORFA member writes: This visit from Oxford was not an official town-to-town delegation, but it followed the signing of the Oxford-Ramallah twinning agreement, and the Oxford Ramallah Friendship Association (ORFA) visitors were especially well received at every level. Two members traveled out on 4th April, two more on 7th; all visited Jerusalem and Ramallah and attended a twinning and friendship conference in Nablus on 12-13th April, returning to the UK on 15th April.

We went to the British Consulate for a meeting with the Consul. This was very friendly, as he is very keen on Oxford Ramallah official twinning. He said that everybody that comes to the UK from Palestine feels they are not isolated, and people going the other way are changed, and this helps develop Britain-Palestine links. The consulate do not have funds for Twinning, but will help in whichever way they can. We then caught the end of the regular "Women in Black" demo. This date was a Friday, so when we went to the Jerusalem bus station for the bus to Ramallah there were large numbers of people. We waited an hour and a half because the Israelis had stopped buses going through Qalandia check point. We had to walk through that checkpoint and catch a 'Service' on the other side.

We went to Palestinian Museum, attached to Bir Zeit University, where we attended "Intimate Terrains" art exhibition. This explored Palestinian artists, through their relationship with place and location from the 1930s to the present day, showing erasure, fragmentation, distance and belonging. To me the video work was outstanding, of Suha Shoman, and Larissa Sansour.

After this we had a meal in Ziryab's, a Ramallah restaurant where we spoke to the artist owner who had a work in the exhibition we'd just seen. We also had discussions with Mohammed Aruri about the political situation with the new Prime Minister and government. Political organisations are each given one Minister, his, Palestinian Democratic Union (FIDE) is given Agriculture; but the Popular Front (PFLP), Moustafa Barghouti, and others have refused. 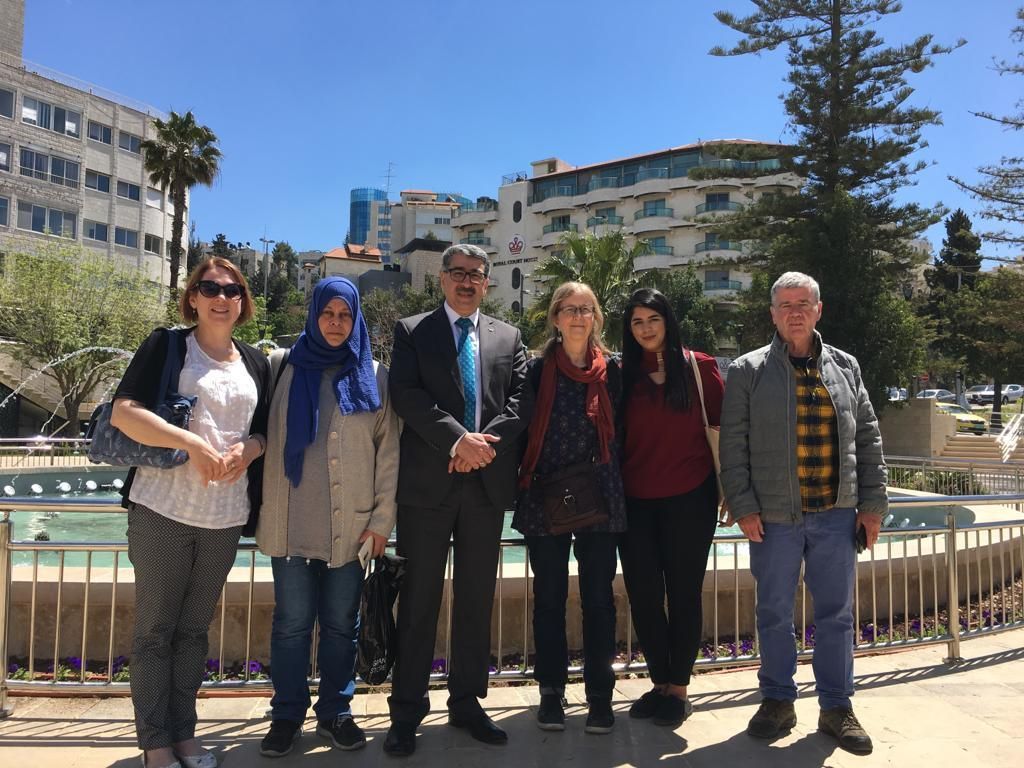 On the Sunday we went to the offices of the Democracy and Workers Rights Centre. We learnt about the present situation of the unions, particularly the democratic independent unions.

The new social security and health and safety laws are a mess. Unions have been campaigning for these for years, but they have to pay towards them, and people believe that the money will be taken by the Palestinian Authority. The implementation of laws are only partial, so severance pay, a legal entitlement is only paid to 25% of workers, while 50% don't get maternity leave, some of them get it in their summer holidays, and there is no paternity leave. Last year they were guaranteed one year of kindergarten, but workers there only get half salary. These workers are in a democratic union.

The Labour laws are different in Gaza, as Hamas has instituted its own. There, 70-80% of workers are paid half of the minimum wage. Hamas has its own union. Demonstrations of unemployed graduates are suppressed.

In the West Bank the Palestinian Authority banned the Union of Public Employees, which had 40,000 members, and carried out sanctions against its leaders. This had a big effect on independent unions, and although still active in banks, hospitals and colleges, they haven't had a congress for some time.

New laws on pensions and so on are not being implemented, and the judiciary does what the executive wants.

From here we went to the Yasser Arafat Mausoleum and Museum. Interesting for anybody who doesn't have knowledge of the history, and it declares that he was poisoned by the Israelis. 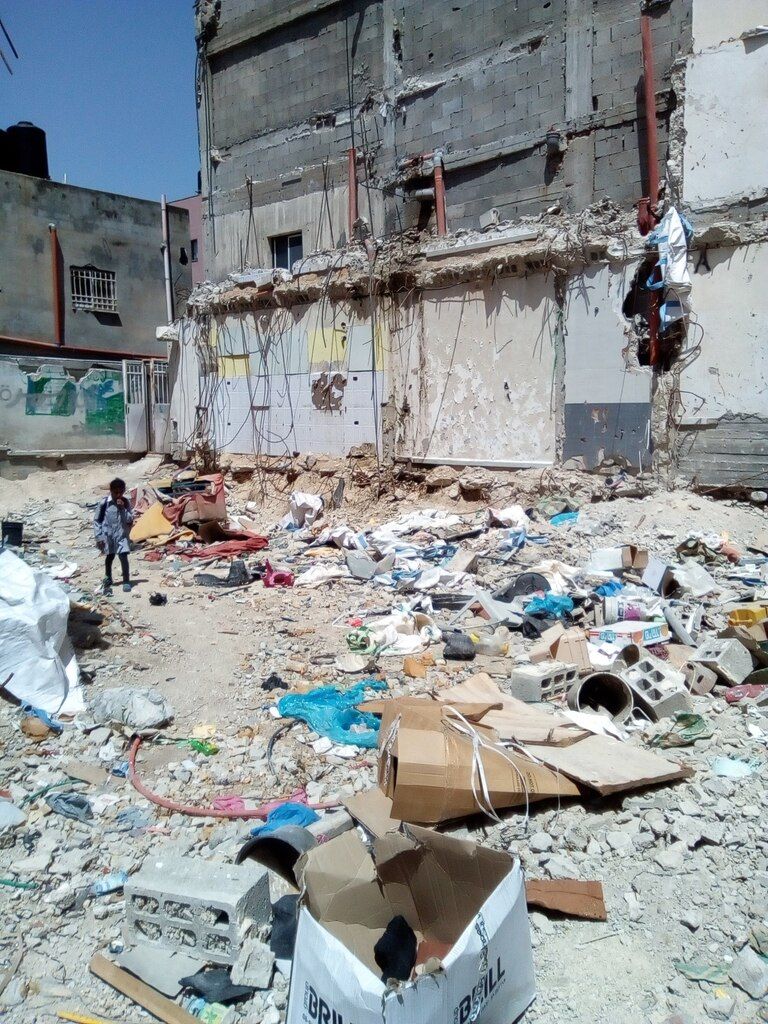 To Town Hall to check about meeting Mayor.

We visited Al Amari camp to discuss a project for a sewing trip to the UK. Then to Defence of the Child International (DCI), where we heard a long report on the present situation, with 500/700 per year child prisoners, and figures for those with no representation, use of stress positions, hand and feet tying, beatings etc all above 50 percent. When children lose more than one quarter of the year of school, they have to retake it, and some are embarrassed by this and don't do it. No efforts are made to help them complete the year with extra tuition etc. Must step up reporting.

First we went to an UNWRA school in the village of Ein Arik, with a view to linking them with one in Oxford. We met the head teacher and other teachers, and saw the school council in action in the playground, organising activities including a Dabke dance. We discussed a number of possible joint actions.

After this we went to a meeting with the Ramallah Mayor, to plan involvement of citizens at both ends to have pressurising bodies to make sure activities happen. We discussed cultural activities, and how to involve young people. We continued the discussion over a meal in the Municipal Garden restaurant. We hope the new Oxford Lord Mayor will be invited to visit. In the evening we went to Deir 'Ammar village/refugee camp. There we watched traditional baking. We followed this by a visit to the countryside, an idyllic cup of tea with a farmer with an amazing display of wild flowers. This were taken up the hill to the top of the village, from where could be seen 7 settlements on hilltops all around. We returned to the women bakers and ate their delicious produce. 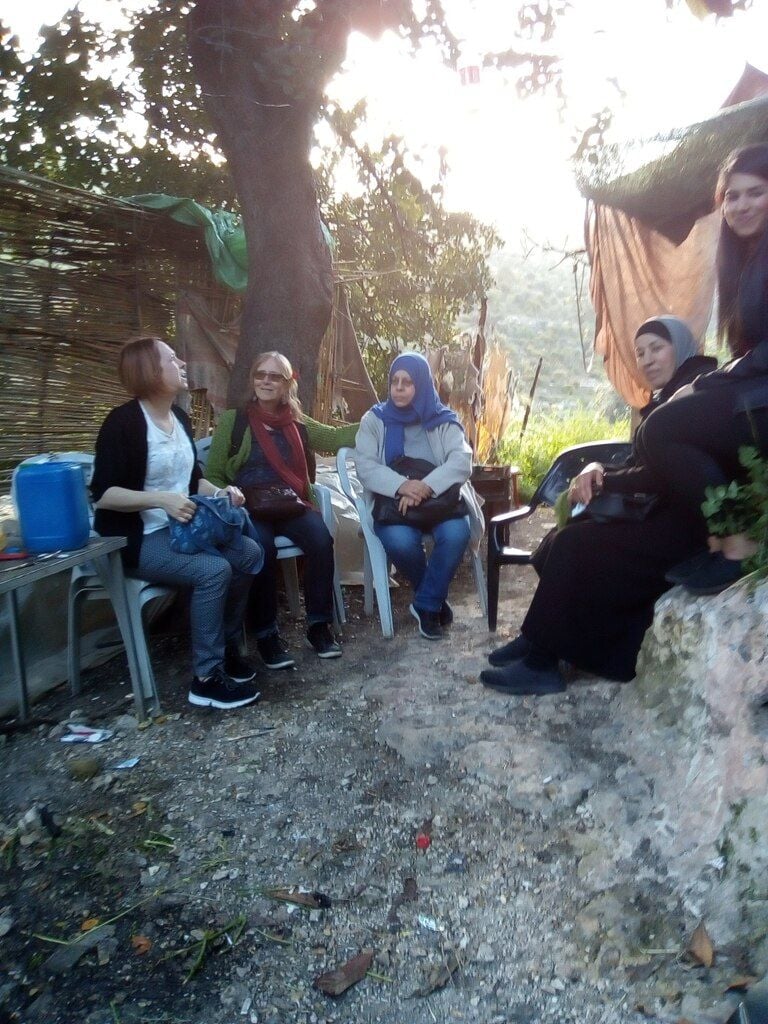 We went to Bethlehem for a visit to the Museum of Natural History, where our first timers were able to see this amazing museum showcasing local flora and fauna, as well as initiatives in biodiversity and sustainability.

The Director Mazin Qumsiyeh gave us a talk on the political situation, stressing as usual that in nature diversity is a necessity to survive, and the attempt by the Israeli state to remove Palestinians would not succeed.

We then went into the centre of Bethlehem to see the historic sites. Back in Ramallah/Al Bireh, we went to the project that ORFA is supporting of a new toilet in the Karate and Yoga Centre in Al Amari Camp. In the evening we attended a celebration of the twinning in Al Amari Camp Women's Centre.

The Twinning and Friendship Conference in Nablus had a number of Nablus notables address it. This is not surprising, as Nablus has officially twinned with Dundee for nearly 40 years.

So the Mayor attended, as well as the Chamber of Commerce, and the Governorate, as did the British Consul General Philip Hall. It was also addressed by a number of the groups, Dundee, ORFA, Walsall/ Kobar. We managed to discuss with the Director of the British Council, Martin Daltry, how the Council helps facilitate school twinnings. There was some discussion, about twinning from below with the poorer layers of society.

We then had a tour of the old city, including a soap factory, and the Turkish Baths. 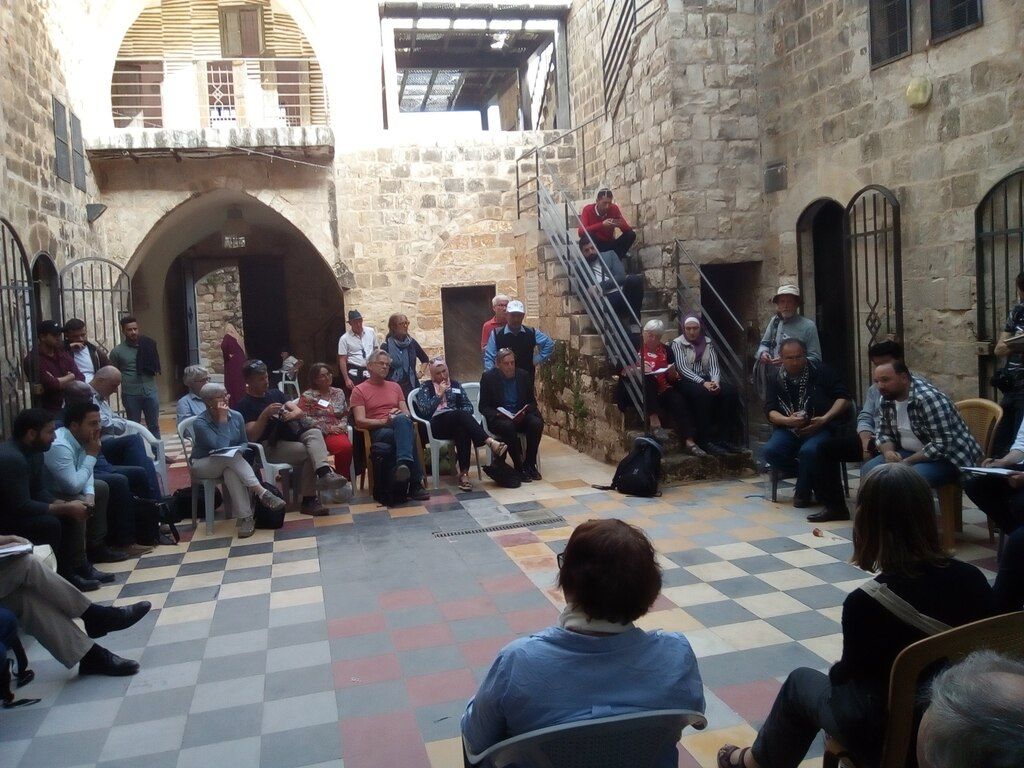 On the second day the Conference went to Sebastiya, about 10 miles outside Nablus. It is the site of many important ruins. In the town itself is the cell of John the Baptist, an old Ummayed mosque, an ancient church, and a still in use Ottoman mosque.

We then toured the Roman remains, where the Roman elite used to come from Nablus, and saw columns, a small theatre, a medium sized amphitheatre, and the remains of a 6th century BC Greek tower.

These sites were the most-visited in Palestine, until the Oslo accords, when the Roman remains were listed as Area C, under the control of the Israelis, and the rest Area B.

Right next to the Roman remains is a settlement which for years dropped its sewage into the area. After a long campaign this was stopped in 2015, but it has started again.

We returned to central Sebastiya, for food and entertainment, and a final discussion on the development of the organisation in Palestine.

We strolled around the Old City in Ramallah, and then went to Al Amari for a final goodbye meal. 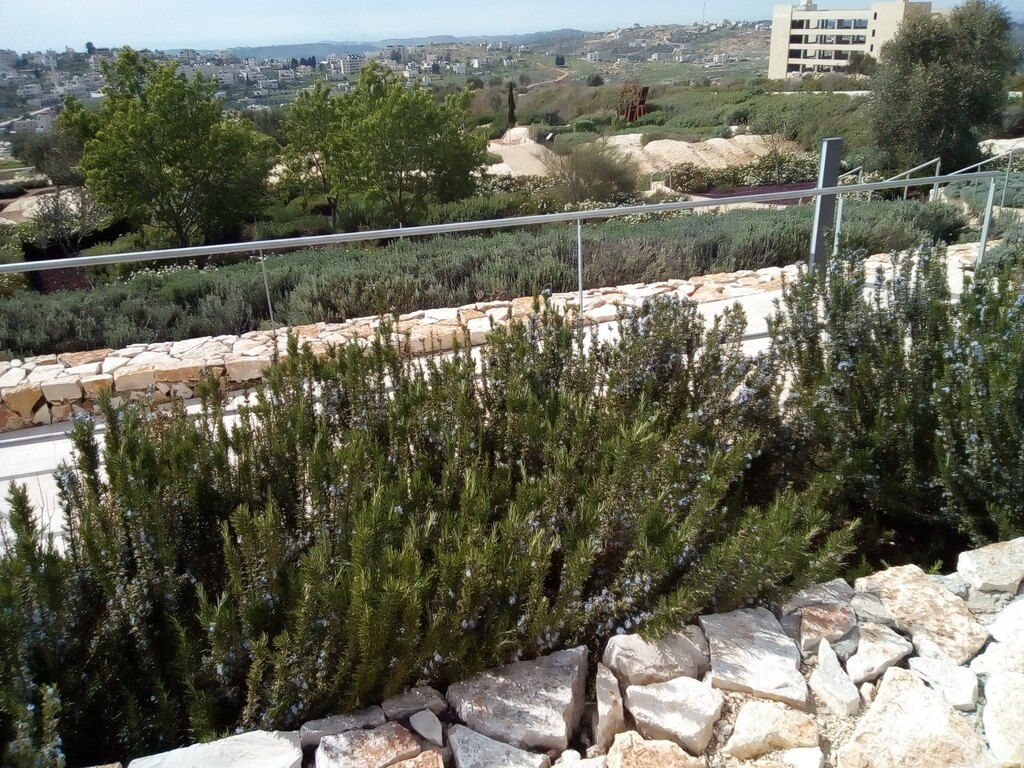 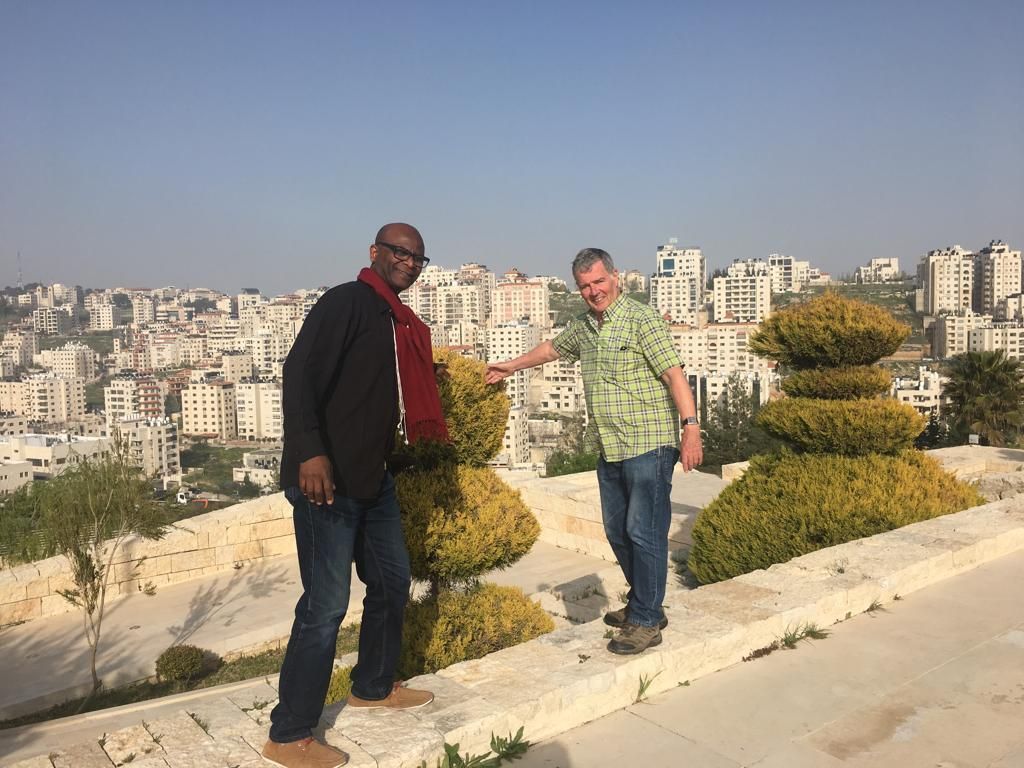 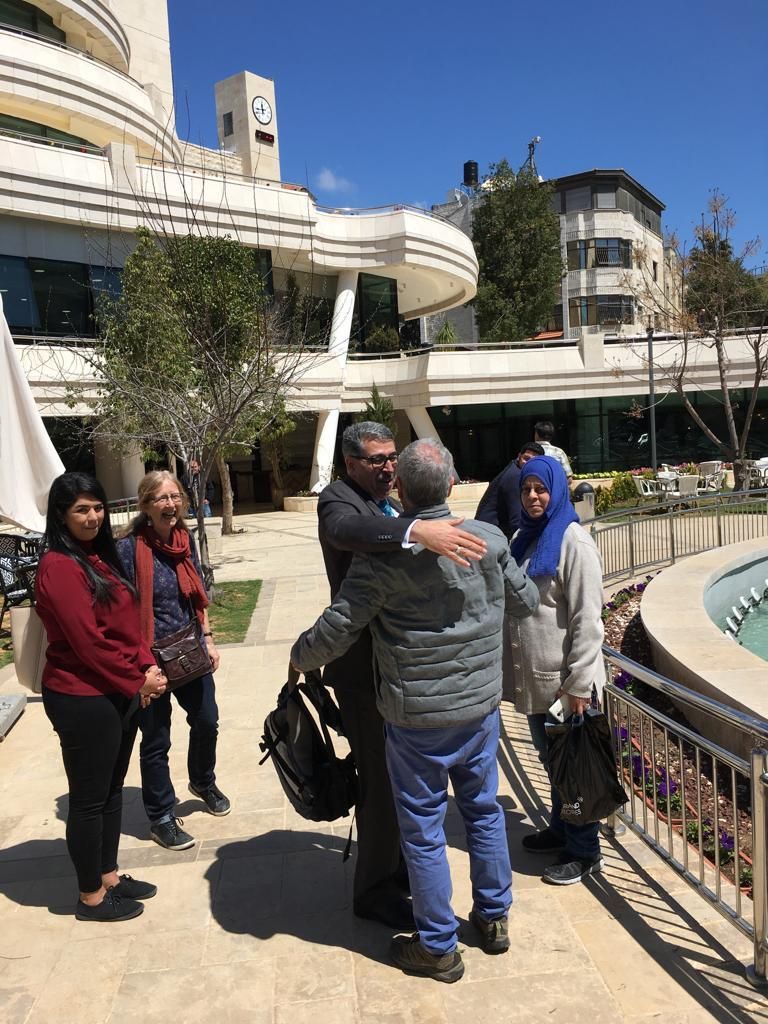 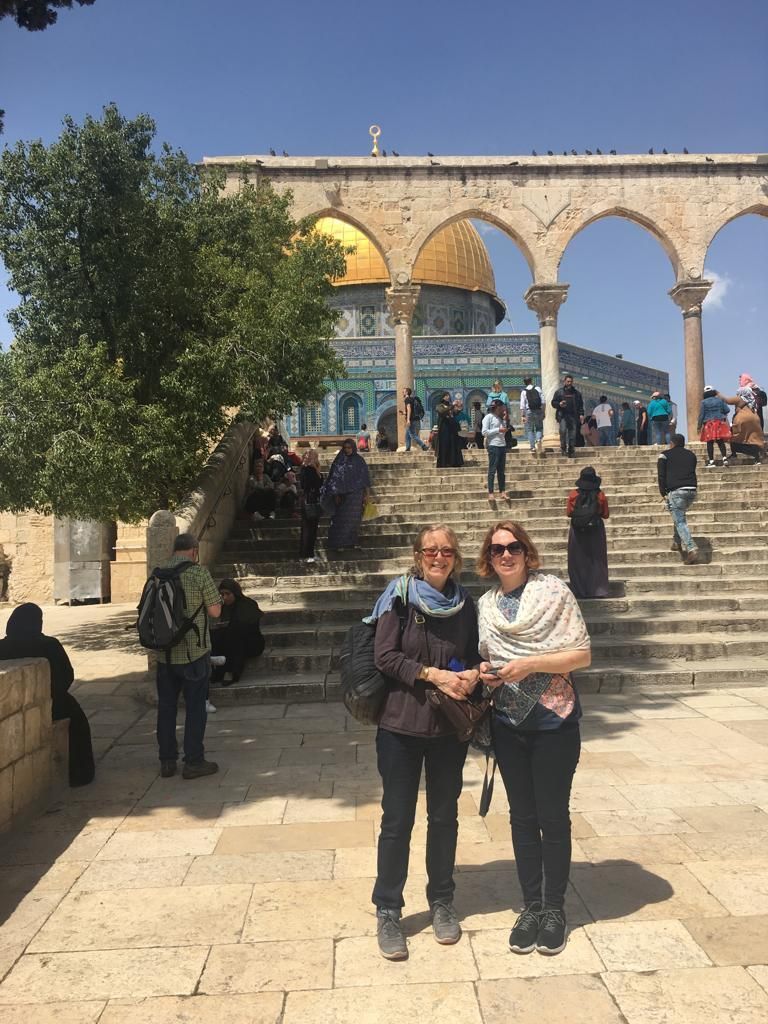 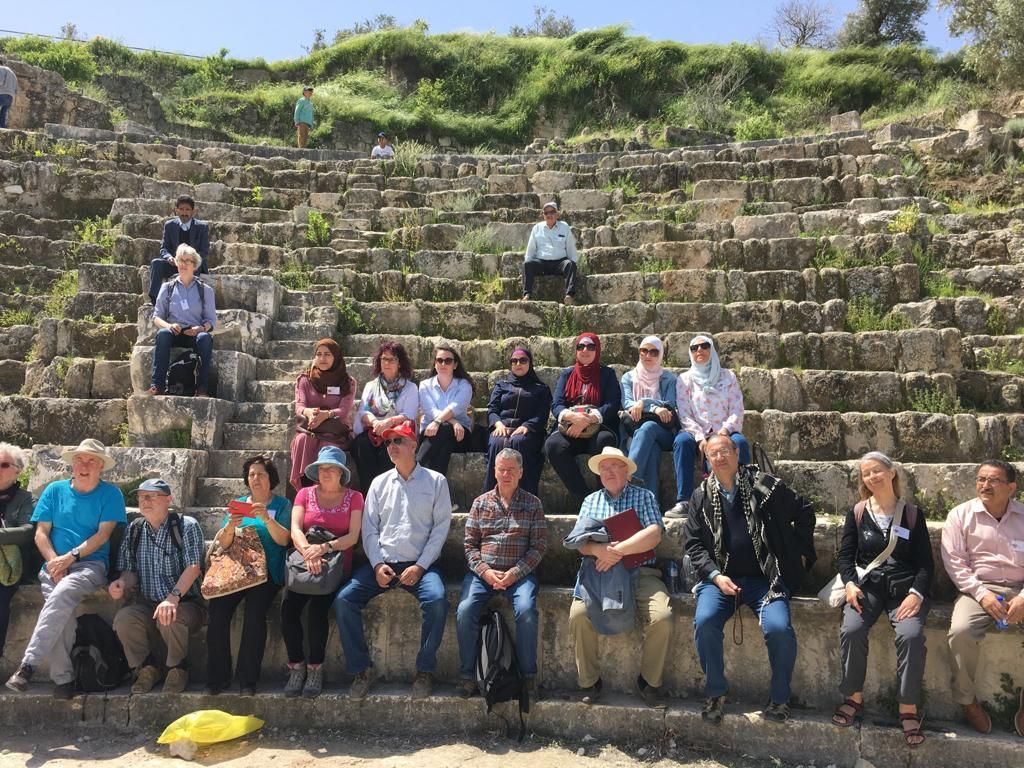 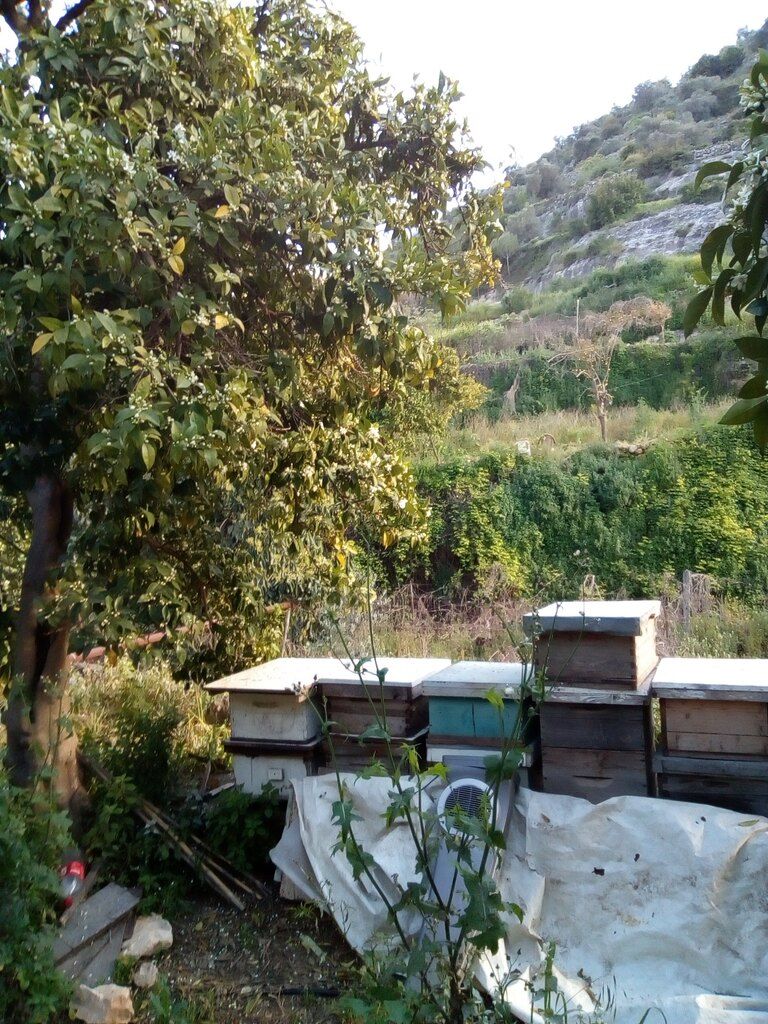