Report from Hekmat Bessiso, director of the Respond to Conflict project in the Al Amary Refugee Camp, Ramallah. Received 20/7/07. 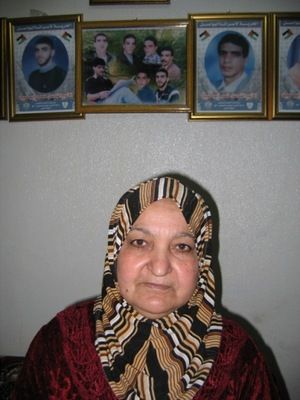 Latifah Naji Abo Homeed, 61 years old, lives in Al Amary Refugee Camp in the city of Ramallah in Palestine. Of her 10 children, one was killed in 1994 by Israeli military & seven have been imprisoned by Israel. She longs to see them but has only their photos for comfort. She has asked to be taken to prison herself so that she can live with them.

Latifah remembers how her son Nasr loved to play with his first son; his wife delivered his second child while he was in prison. She misses Basil's jokes, Naseir's kindness, and Muhamed's helpfulness. Her youngest, Jehad, was always missing his older brothers, and now he, too, is a prisoner, awaiting his own conviction. Sharif is engaged and dreams to be free and marry his bride. Islam was known for his beautiful eyes; many girls tried to win his attention by being nice to Latifah. Latifah does not attend any weddings because she is afraid she will not be able to control her tears. She despairs that she will die before she can witness her own sons' weddings.

Though Latifah has not given up hope that her sons and other Palestinian prisoners will be freed, she often feels that no one remembers them and no one is fighting for them. She prays, searching for the strength and patience to endure life under Occupation and the unending separation from her sons. The home Latifah shares with her husband has been demolished twice in the last ten years. She and her husband, 67 years old, have recently opened a small candy store in their home to try to earn money and fill their free time.

This is the story of countless Palestinian women, who hope for the freedom of their sons, husbands, and brothers with every breath.